AAUW-NJ was represented at Seton Hall University on September 27, 2019.  As a member of the New Jersey Coalition Against Human Trafficking (NJCAHT), it was thrilling to be in attendance when Nadia Murad, the 2019 winner of the Nobel Peace Prize, was presented with an honorary doctorate degree from the Seton Hall University’s School of Diplomacy and International Relations.

The eradication of modern day slavery requires awareness and recognition of the problem, enforcement and monitoring of existing laws, and the elimination of the conditions which lead to bondage.  Look around:  see something; say something; do something.

There was a SOAP distribution to Hotels and Motels in Monmouth County on Saturday May 4.  Arlene Inglis and Ginny Lyttle participated for AAUW.  A picture was taken with Congressman Chris Smith, a staunch supporter of our efforts to eradicate Human Trafficking, Theresa Flores, author of A Slave Across the Street and developer of the SOAP project,  and Sue Flynn coordinator of NJHT SOAP initiatives. 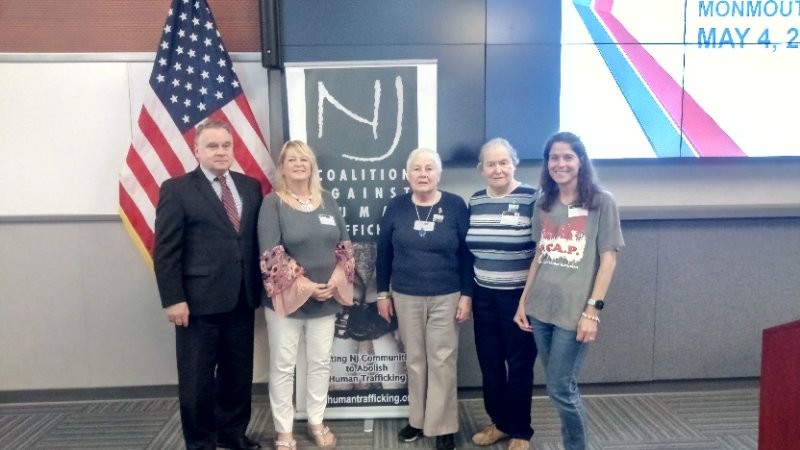 NJ Human Trafficking Coalition does several Soap distributions a year around the state.  We start by showing the Motel or Hotel person a poster of local missing children and then go into a talk about looking for suspicious activities by clients.  We then leave soaps with the national hot line number at mom and pop establishments asking them to leave the soaps in the guests’ bathrooms. The soaps have been an effective way to reach people who can help free victims.

Here are some Statistics on Human Trafficking given by Teresa Flores and Chris Smith.
2nd most profitable crime
80% women and girls are trafficked and 20% men and boys
1000,000 American kids are being trafficked right now
13 average age of girl being trafficked
3% kidnaped
35% trafficked by a family member or friend of the family
60% blackmailed
77% of adult prostitutes were trafficked as children
There are 1.3 million missing kids in America.
Social Media is the number 1-way traffickers meet victims.
The only way to stop this is to stop the demand.  We cut smoking by society pressure.

A number of our NJ Branches have been involved in Human Trafficking Awareness Initiatives.

The Freehold Area Branch arranged for their local communities to adopt proclamations regarding the problem, and declare January 11 as Human Trafficking Awareness Day.